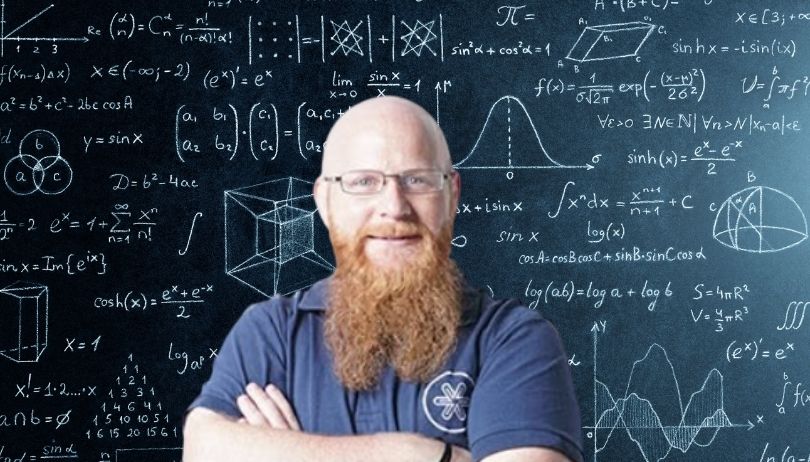 Chad had a natural talent for numbers. To him, it made sense. So it wasn’t a surprise when he sat through multidimensional Calculus classes in highschool (this did not mean though, that he was diligent with his homework wink). Chad pursued Computer Science and Math in college, at the University of Iowa.

In August 2001, Chad enlisted in the United States Marine Corps out of his curiosity in training and interest in the history of the branch. Chad’s perspective and values changed completely after the 9-11 attack.

After serving, Chad came back to his first love, numbers; and enrolled at Oregon State, studying Computer Science and took Statistics as his minor. He was one of the pioneers at Oregon State to venture into an undergrad Statistics minor.

Chad also has a love for sports, football (soccer), ultimate frisbee, and running as influenced by his sister. He used to join half-marathon races, and even signed up for a race in Oregon, before actually setting foot in the state. There was even a time when he finished 12 half-marathon races in a 13-month span!

In this feature, we get to know Chad, his journey into Fintech, and his life as Tech lead.

How did you learn about Brankas? What were your expectations going into a fintech startup?

I had no idea what to expect. I hadn’t worked in corporate space or in startups before. It was part time or freelance experience through school and then full time military service for 10 years. Also, when I joined, there were 5 staff in Brankas including the founders.

I met Ken, the co-founder of Brankas on the Go language Slack where he posted an open job position. I jumped on a call with him and a week later with Todd, also a co-founder of Brankas. I didn’t realise how small the company was until a month later when I met them in Jakarta! The company has grown and is ever changing since. I have noted 7 major turning points in the company, it’s like being in a new company each time! Often, I get questioned for staying in a company this long but it hasn’t been the same thing from one year to the next and you’ll be lucky to be able to work on the same thing for three months!

What is your current role at Brankas, and what made you decide to accept it? Any tips that will work for a remote-only environment?

It was Brankas culture, the opportunity to grow the engineering team with the freedom to build. I am interested in building from scratch and didn’t understand the payment structure in Southeast Asia. The first time I landed in Jakarta I thought I was set with a card in hand but unfortunately, cash is still king. I remember the last time I carried cash was when I was in high school!

As a Tech Lead and Senior Engineer at Brankas, my advice would be to take copious notes with pen and paper. Remote-only environment only means you will be on back to back calls and I dare say that 99% of the time, I would not be able to remember the details of the conversations. Ironically, I would start drafting and sketching system designs and structures on paper before building it with code.

What unique skills did you hone at Brankas? And what tasks helped you brush up on those skills?

System designs and the planning for technical systems. The more I experience interacting with APIs and designing and building, the more I learn about what’s a good API and what’s a good system design, how we break up the different parts to do different things. It’s either re-designing a new system or building a system from scratch, you would be able to apply previous learnings and see the patterns of what works and what doesn’t. Every project is different but the lessons learnt from the last projects are applicable. The design part is what one does not get access to in open source or schools.

What is your greatest achievement at Brankas?

Building the Engineering team and its culture. It is easy to influence when there’s 3-4 engineers in the team and it gets a whole lot harder when the numbers pass 10 or 15.

What is your advice to individuals with a keen interest for a career switch to tech and start ups?

It is never a loss of skills but rather a build on existing skills. My skills in the military of coordinating movements, people, and aircrafts from ground up are still relevant but in a software environment. Don’t be afraid of starting fresh because it is not, but a new application of existing skills on the subject matter.

Are you interested in a career in fintech? Join the Brankas team!

Brankas is bringing Open Banking to Southeast Asia. Our vision is to make modern financial services available to everyone.

Michelle Christine: Next Generation People Operations Associate - She talks about her beginnings, her love for people and culture, and where she’s taking the future of Brankas recruitment.

This month, we feature Krizelle Lazatin, our go-getter Human of Brankas (HuB) who is responsible for leading and pushing our Sales and Business Development efforts to new heights.