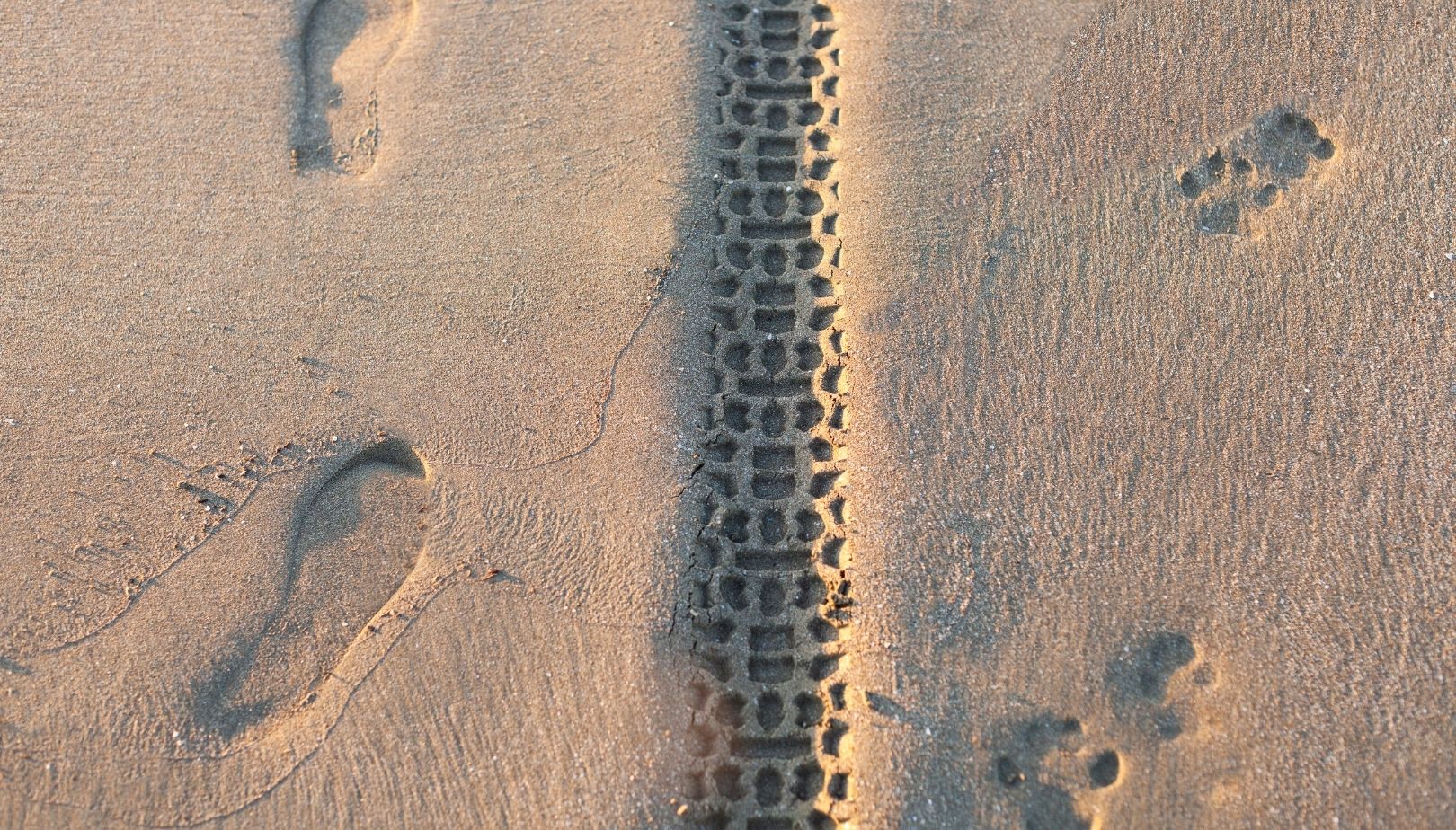 Across the world, in millions of software applications, every API request has its own story from when it enters a system until it exits. Today we are going to look at what is tracing and how tracing helps to identify the bottlenecks in the journey of an API request.

In this blog post we will see how Jaeger tracing can be easily added to a gRPC application in Go inside a distributed microservices architecture. Our gRPC protobuf bindings are generated using a tool named gunk - a Go wrapper around gRPC.

Tracing is the process of adding metadata to a request as it walks different parts of the code/application. Tracing is highly important to highlight the duration of end-to-end request, bottlenecks for individual calls in distributed architecture

Metadata is collected using observability frameworks like Opentelemetry , which then can be analyzed by the developers to understand what is happening throughout the request lifecycle.

While tracing can be added to any application, distributed tracing specifically targets applications that are using microservice architectures where communication between services is much harder to reason about.

Before we deep dive into tracing setup, let’s glance at the two opposing application architectures.

Let’s just go back a few years and think about “monolithic” applications, and imagine the sample request as listed below. There is a request coming in but all the dependent services are available within the same roof, so it flows through the different services before it returns the response. 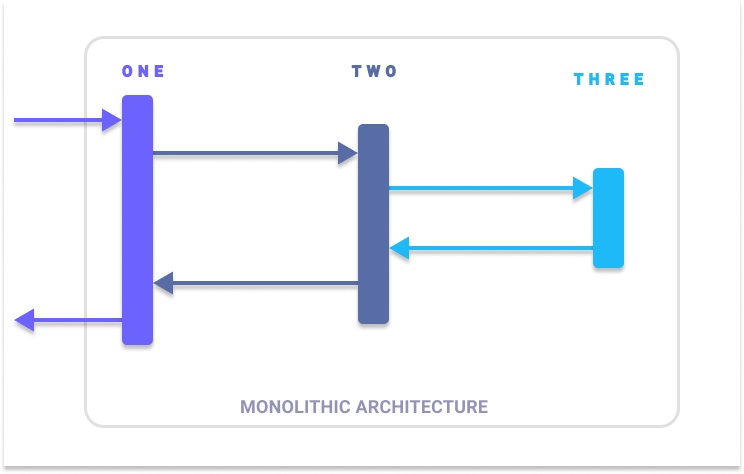 When some errors/problems were identified for an API request the most common way to debug is to walk through the application logs.

Similarly for identifying bottlenecks, the request received was processed in the same system. So if you want to know the time duration of a request, you would again scan through the log timestamps.

A lot of companies have moved away from this kind of architecture, usually by breaking existing monolithic applications into their silos ie. microservices were born.

The name “microservices” itself describes how slim a service shall be. Normally this means it would contain a single feature of an application or groups similar functionality into a single service.

Although microservice architectures comes with an advantage compared to monolithic architectures, there are details to focus on to eliminate the complications. 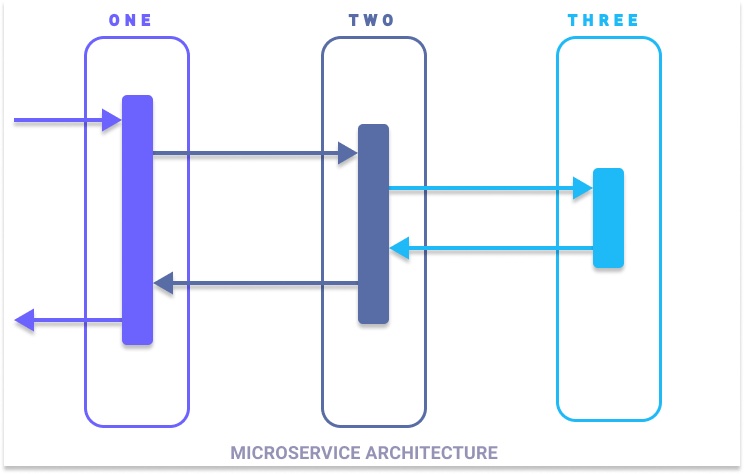 With the above diagram, you can see that the request received at service ONE spans across multiple services before it returns the response. Here the request has been traveling to multiple microservices.

It’s very important to properly decompose the functionality into its silos or services, otherwise, the purpose of microservices is lost as there will be a lot of interservice communications and it’s an unnecessary overhead.

Having said that, a microservice architecture is good for several reasons.

Though there are several advantages, there are complicated things with microservices such as.

To identify issues during the entire request lifecycle, we are going to go into detail on tracing and telling the story of the API request through a microservice architecture using Jaeger.

Monitoring the application is not just to ensure the uptime of the application, it’s much more than that. Tracing becomes an integral part of monitoring where it knows exactly the details of the entire request to identify the possible issues such as performance bottlenecks, distributed transactions, and latency optimizations for any type of operations such as HTTP, RPC, or database invocations.

Jaeger is a tool that was developed by Uber for tracing the API requests which was later open-sourced.

Span - represents a logical unit of work in Jaeger that has a name, and additional information such as the start of the operation (RPC/DB/method) and its duration.

A span can be nested within another span.

Trace - is the path where the request was traveled across multiple microservices, consisting of multiple spans. 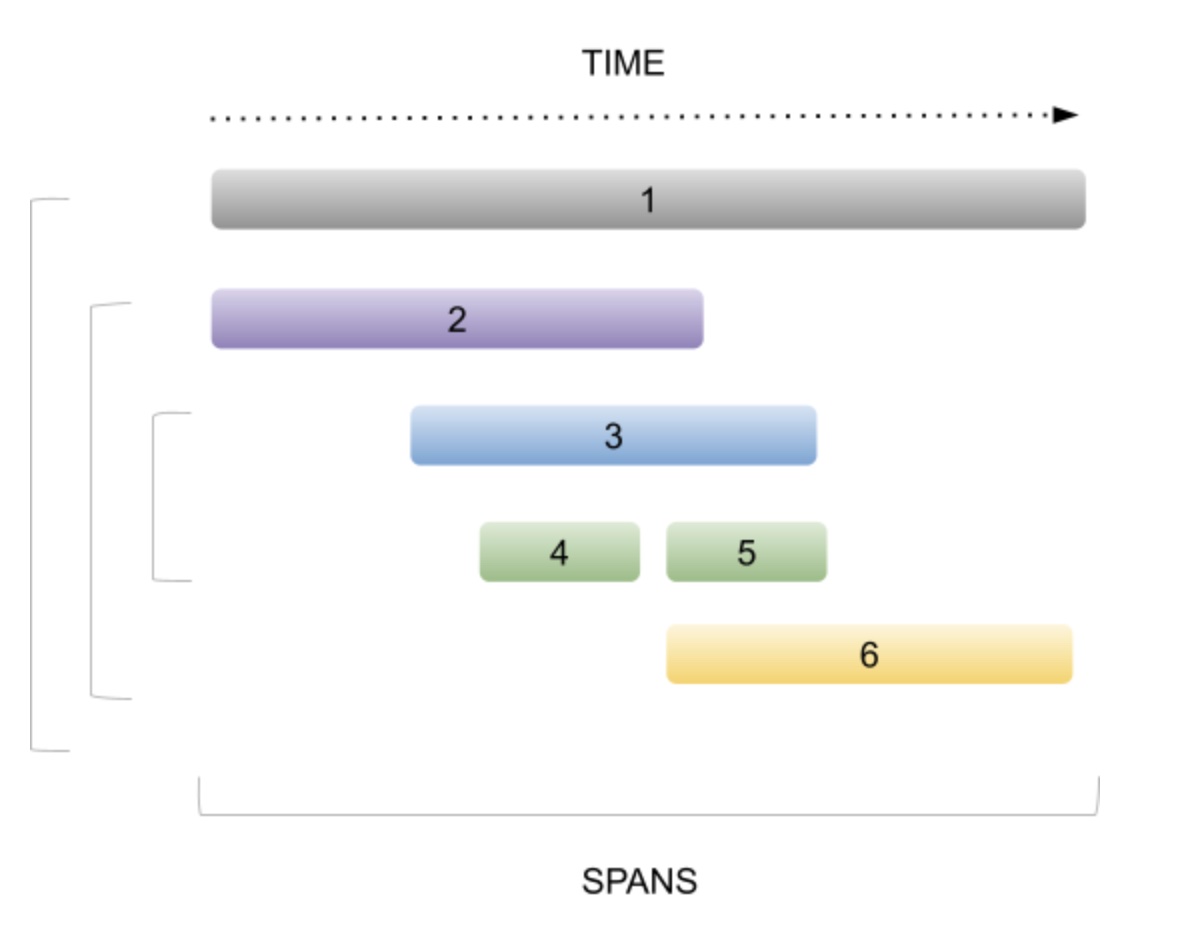 Trace - is the path where the request was traveled across multiple microservices, consisting of multiple spans. 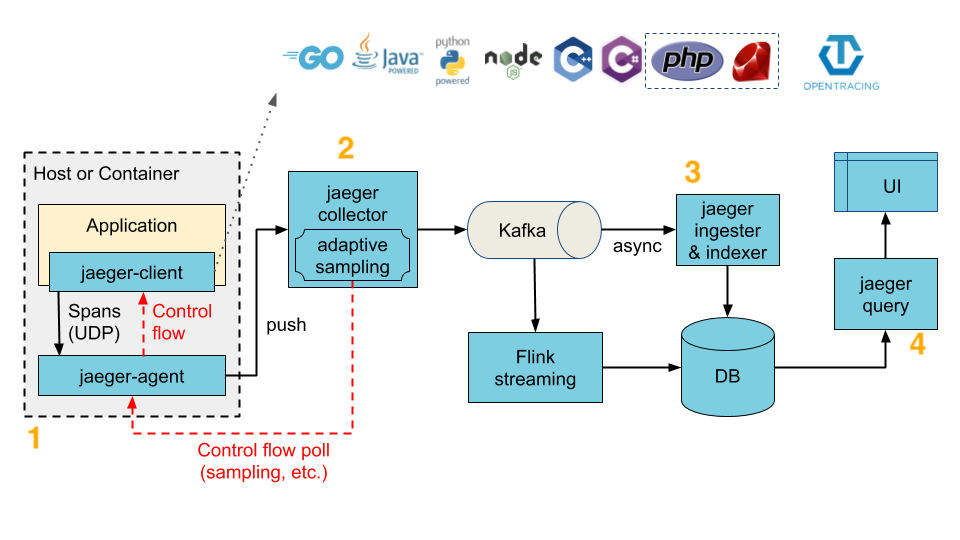 To help us get started, I have built an application that reflects the simple microservice architecture shown above - it has services imaginatively named ONE, TWO, and THREE. All three services share the same code, but we’ll deploy it independently for tracing the service with docker for demonstration.

There is already a protobuf, HTTP gateway, and gRPC service files generated using a tool called gunk , if you never know what gunk is, it is a modern frontend and syntax to generate protobuf files.

You shall checkout the all environment variable here

The gRPC client middleware is responsible for recording the span along with the request trace when one service calls another service as a child span. It is very helpful to see various microservices the request traveled to before the response.

To demonstrate how all fits together with the help of docker-compose we are going to deploy the local instance of the jager-all-in-one image with the three services ONE, TWO, and THREE, that spans requests across the gRPC services. Here is the docker-compose file.

wait for it to complete.

Once the services are running locally, you shall verify it by checking the docker logs and get something similar to this:

Additionally, you can visit http://localhost:16686/ to view the Jaeger UI, although it won’t be showing much yet.

If all looks good, we can run a request through Postman by invoking `sayHello` on service THREE with the below request. 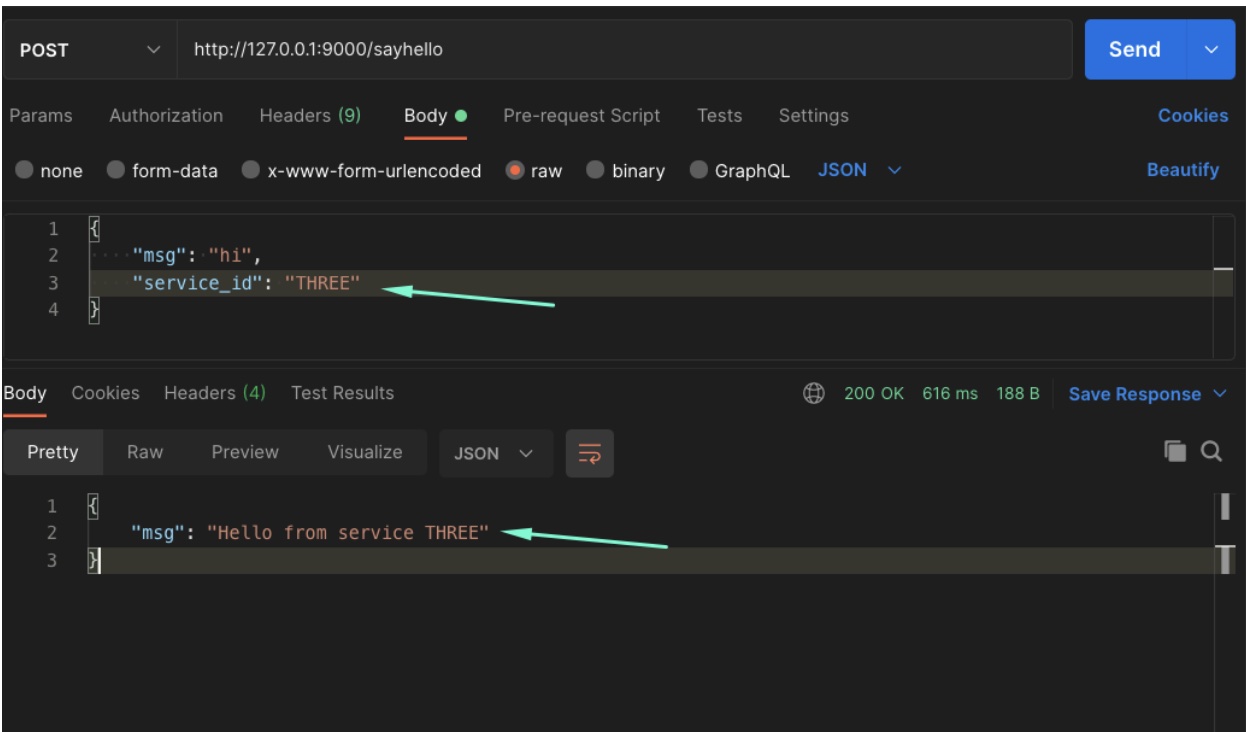 Now that all the hard work is done, it’s the most awaited time to see how tracing looks and notice the life of the request. 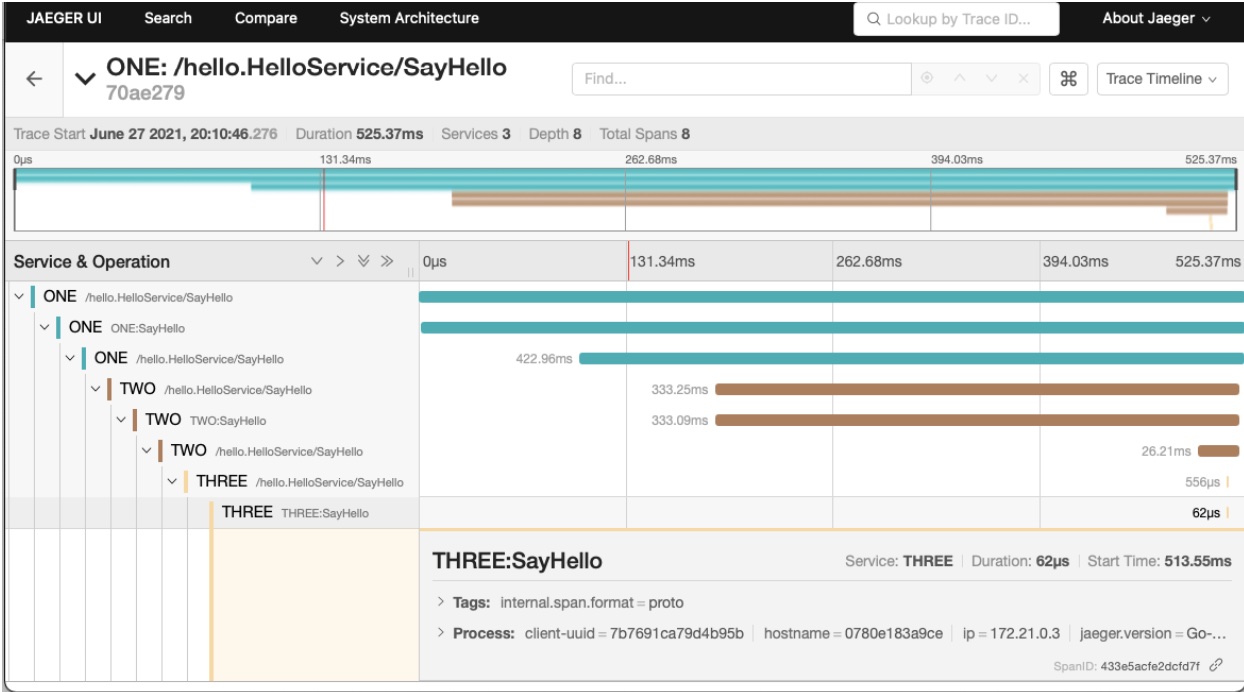 You can see the request traveling through different services and the duration it took throughout the request, and that what we expect to know from distributed tracing and that’s the story of the request.

The full source code is available here in Github.

Jaeger is a CNCF graduated project, and it’s been used widely for Kubernetes-based application deployments. If you would like to run Jaeger in production please check out the reference links.

If your application needs tracing, then I would suggest giving it a try for Jaeger tracing as it is battle-tested with Uber with millions of spans every day.

This pandemic has taught us to be resilient and adaptable in how we live our days. As we look forward to an endemic, our resident Product Manager, Marco Palinar shares how his team tackles the challenges faced to launch a product during the pandemic by leveraging on design.